I am Sharonlee Imageweaver and I will be explaining the post-processing techniques that I use on pictures generated with Snowpixel app in order to create images that tell a story.

To take an image a step further I use Picsart, which is an image and video editing program with multiple functions and usable elements. Picsart offers functions such as remove background, cut and paste, retouch, change hue, enhance colour, text, draw to name a few.

I also source usable elements from Pixabay which is a free stock image sharing site.

Using Picsart , I cut the background from behind the girl and gave her a  crown because she had the top of head missing. I then added girl to Snowpixel landscape.

To illustrate my methods I've made up a few storyboards which hopefully help explain my process.

I use Snowpixel to create unique backgrounds, landscapes and characters then download them into folders on my device.  Currently I am using a Samsung Galaxy Tablet.

I added the centaur-like archer and foliage on background. The centaur woman I had made earlier by cutting the 'head' off a horse and the legs off an archer and combining them to create a new element.

For this image I used two images I generated (because honestly the quality and clarity of Snowpixel is without equal) then using the 'remove background' function in Picsart I cut out the Bearded character so I could add him to the tree Landscape background. I gave him a hat another element because he had flat head.

After I discovered Snowpixel a whole new depth has been added to the images/art I create .

This character is actually a self portrait!

I took my head and added clothes , further added aesthetics like the mushrooms and dried flowers. Even though I do have long hair I added a wild wig. Fox and plants also were added to create the final image on a Snowpixel background.

‌  I hope you enjoyed this look into my creative techniques using which I am taking Snowpixel images to another level.

Are you making fairytale landscapes with the Snowpixel AI? Tag us on Instagram @snowpixelapp so we can share your favorites!‌ 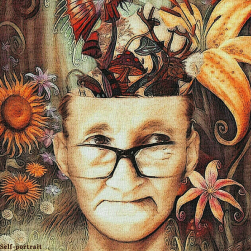